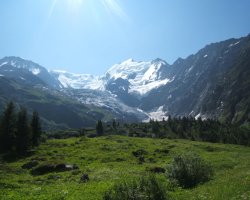 The mountains of the Northlands are home to the great dwarven clans, who struggle against barbarian raiders, giants, and on occasion even chromatic dragons.  Few other races ever behold their halls, but adventurous traders cross through the Mavre to reach border towns and deliver their crafts to markets south in Estelle.  The Mavre serves as an informal border between the two nations.  Beyond the Northlands spread the Frozen Wastes where the ice dragons and frost giants dwell.

Gul Gurum is the largest dwarven city, tucked in the depths of the Dragonspeak Mountains.  It was founded two thousand years ago by the lost Firetomb Clan.  Currently, it is ruled by King Cbehr Ktalsson of the Deepdelve Clan.

The majority of dwarves and rock gnomes found in the Known World originate in the Northlands where they generally ally with one another.  Half-orcs and half-giants are more common here than in the other nations as well.  Humans tend to live in settlements along the coast. Dragonborn, Lycans and lycanthropes can also be found here.

The dwarves and gnomes favor lawful or nuetral alignments.  Half-orcs and half-giants and Northland Lycans (wolves and bears and seals the most typical sub-races) are often chaotic if not outright evil.  A variety of gods are worshipped, many of them with dark or war-like aspects.

Barbarians, druids, paladins and rangers are more common than wizards in the Northlands, but the wizards who have built their towers there are generally formidable and select their apprentices with great care.

Additional Links About the Northlands & the Frozen WastesEdit

Retrieved from "https://ellorien.fandom.com/wiki/The_Northlands_%26_The_Frozen_Wastes?oldid=4145"
Community content is available under CC-BY-SA unless otherwise noted.