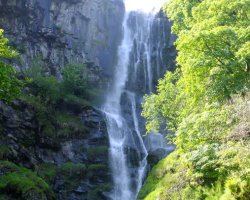 The gently rolling hills and fertile forests and vales of Rhawry have been the home of the wood elves and the halflings since both races emerged into Ellorien.  High elves and eladrin are plentiful as well; there are a number of permanant hedge gates leading into the treacherous Briar scattered throughout Rhawry, linking the nation with the Feywild.  Tree cities and stone spires shaped jutting peaks are just two examples of how Rhawrian architecture embraces natural shapes and elements.  The human population of Rhawry are descended from settlers from the lands that are now called Estelle and the Northlands who set up colonies along Rhawry's islands and main coast.  Over time, a great deal of interbreeding took place between the elves and humans, with half-elf children often marrying other half-elves and creating an inclusive, ecclectic culture of "old" and "new" aesthetics.

Beyond those mentioned above, hill dwarves, lycans and gnomes are fairly common.  Half-drow, half-friends, and warforged are generally not 'native' here.  Vampires, revenants, and imbued are quite rare.

The mixed elf/eladrin/half-elf/human culture generally favor good over evil and chaos over law.  Nuetral good, chaotic good, and chaotic nuetral are probably the most common.  The most popular gods worshipped in Rhawry relate to nature, hunting, the moon, love, and luck.

Druids and rangers are extremely common in Rhawry, as are bards and pirates.  The High Elves consider themselves superior wizards and sorcerers, though many half-elves strive to prove themselves their equal.

Retrieved from "https://ellorien.fandom.com/wiki/Rhawry?oldid=4123"
Community content is available under CC-BY-SA unless otherwise noted.